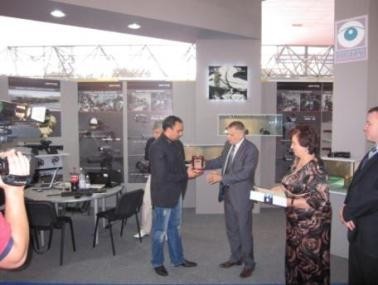 IdentifieR-60 Was Officially Presented at HEMUS 2010

During its 15-years history the exhibition follows and achieves its primary objective to stimulate the defense industry, said Minister Anyu Angelov during the official opening of the ninth edition of the International Defense Equipment Exhibition "Hemus" which took place from 26 to May 29, 2010 within the International Fair Plovdiv – the largest exhibition center in South-eastern Europe. Expressing belief that such forums provide to producers and traders the best opportunity to learn about developments and scientific achievements made by Bulgarian and foreign developers of weapons and military equipment, Minister Angelov visited and looked through the  recent developments of OPTIX Co in the field of termal vision. Especially for this important defensive forum the team of the company had prepared the thermal IdentifieR-60, which impressed everyone with its exceptional technical features. Along with the innovations  the visitors of the exhibition had the opportunity to see the full production range of the company which brought its popularity over the years as a serious and committed producer to user`s needs. On the last day of the event OPTIX Co received admiration also by the Vice Defence Minister Mr. Valentin Radev, who officially gave on behalf of the organizers of an honorary diploma and a plaque for the successful performance of the company at Hemus 2010.