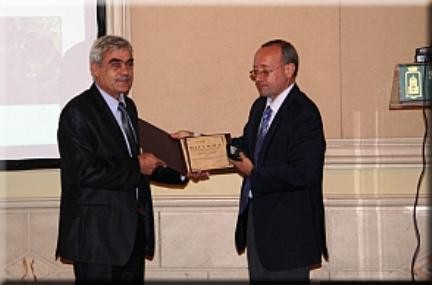 OPTIX Co and Tokuda Hospital became the first Bulgarian companies to win the Japanese Quality Award "Bosei" on an official ceremony held in Hotel "Sheraton"– Sofia. The award was announced for the first time in Bulgaria and was initiated by the Bulgarian Chamber of Commerce and Industry, the Bulgarian-Japanese Economic Council, the Institute for Postgraduate Studies at the University of National and World Economy, the Japanese Association for International Cooperation JICA and Tokai University.
Before giving the award, a special commission audited and assessed the effectiveness of the Total Quality Management practices implemented at OPTIX Co. The successful combination of the Integrated Management System, which includes 5 international standards (ISO 9001:2000, ISO 14001:2004, OHSAS 18001:1999, ISO 27001:2005 и NATO AQAP 2110) with the Japanese TQM practices, convinced the selection committee that the price should go to OPTIX Co.
The history of the TQM practices at OPTIX Co began back in 2003 when the company together with the Japanese Productivity Center started a series of in-company trainings and practical tuitions on "Productivity Improvements", implementing some "Kaizen" activities such as "5S". Two years later, using the Japanese model for Total Quality Management, the company implemented "Quality Control Circles" that aimed to train and help employees to solve the daily faced problems and analyze their causes. Only three years after starting the circles the results were visible – the two-way communication between the management and the employees was ameliorated and quality of the production was improved.