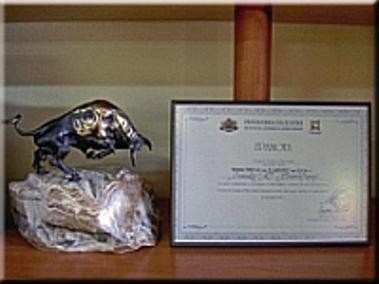 On 12th December 2006, "Invest Bulgaria" Agency held "Investor of the Year 2006" ceremony. This traditional competition reflects the investment activity in Bulgaria. Important investments in various industries, also high-tech projects and municipalities with high level of entrepreneurship were awarded this year. Foreign as well as domestic investors were nominated. Eight winners received the honorary statuette "Investor of the Year 2006" in eight different categories. OPTIX Co won "Investor of the Year" competition in the category "Investor in the area of innovative high technologies".
The prize was handed over to OPTIX Co CEO Ivan Cholakov by the Minister of Economy Rumen Ovcharov and the "Invest Bulgaria" Agency Director Stoyan Stalev. This acknowledgement comes after the serious investments which the company made in 2006, acquiring some cutting-edge technologies and increasing the productivity in some production sectors.