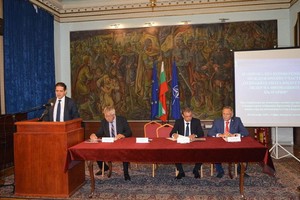 On the 20th of September in the Central Military club in Sofia an International conference under the slogan “The military industry – leader in the innovation” was held. The forum was organized by the Bulgarian Defence Industry Association under the patronage of the Deputy prime minister and Minister of defence Mr. Krassimir Karakachanov and the Minister of economy Mr. Emil Karanikolov.

The event was opened by the reports of the Deputy minister of defence – Mr. Anatolii Velichkov and the Deputy minister of economy Mr. Luchezar Borissov. The Co-chairman of the Association – Academician Vodenicharov presented the last achievements of the member companies. The Defence Industry entities have ensured work for more than 30 000 people in Bulgaria and with around 1,5 billion Euro turnover yearly they secure 2,97% of the GDP of our country.

The presentation by the vice president of the French company SAFRAN – Mr. Olivier Lafaye gained an extreme interest on the projects of the company for international development.

In the panel presentation part of the conference the Marketing director of OPTIX – Mr. Zhelyazko Gagov gave information on the capabilities and the capacity of the company for the participation in the project for the Acquisition of military equipment for the battalion fighting groups from a mechanized brigade.