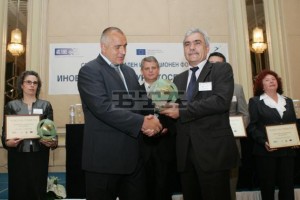 OPTIX Co - Innovative Enterprise of the Year for 2010

OPTIX Co won first place in the competition "Innovative Company of the Year" in the seventh National Innovation Forum "Innovation and Competitiveness" in the category "Medium and large businesses". The high honors were received for development and production of series of thermal imaging cameras with civilian and special purpose.
The award was given to the Executive Director eng. Ivan Cholakov personally by the Prime Minister of Bulgaria Mr. Boyko Borisov.
The event is organized by the fund “Applied Research and Communications”, Ministry of Economy and Energy and Tourism and the Representation of the European Commission in Bulgaria. The forum is organized under the auspices of the Prime Minister of Bulgaria and with the support of the Enterprise Europe Network - the largest in Europe, information and advice network for small and medium enterprises.
During the event, was presented an annual report of the foundation - the Innovation.bg 2011, which gives an overview of the innovation system and policies of Bulgaria and the dynamics of the innovation index of the Bulgarian enterprises. The Prime Minister said that there is already an analysis of the strengths and weaknesses of the Bulgarian economy. This will allow you to determine where is best to steer investors to move in a direction that will bring revenue and income increase. According to Borisov, by this analysis can be seen and where the state has lost.
The forum was attended by the  ministers of Economy, Energy and Tourism Traycho Traykov, of Regional Development and Public Works Rosen Plevneliev, of  Education and Science Minister Sergei Ignatov.