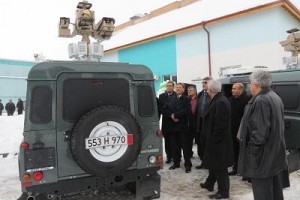 Following the tradition every year in early February to add to our production palette of new production facilities and technologies, on 06/02/2012 OPTIX Co officially opened "IR and UV objectives" - a new facility, built with an investment of 5 , 8 million leva. Its construction was a project that the company has won funding under the OP "Competitiveness" and the amount of subsidy is 50%.

"Such investments places Panagyurishte among the cities developed in technological aspect, both in the region and in Bulgaria. OPTIX Co is one of ten companies that won the preliminary competition for participation in the program and one of the three successfully completed their projects, "said on the official opening the Executive Director of  OPTIX Co  dipl. eng. Ivan Cholakov.

The event was attended by the governor of Pazardzhik Doncho Baksanov, the Mayor of Panagyurishte Nicola Belishki, the mayors of villages in the municipality and part of the largest local business representatives.

The new equipment provides a route for the entire production process of crystals from milling to optical coatings. The machines are bought from the world`s leading manufacturers in this field as most of them are unique and almost without parallel in Eastern Europe. The building of the new production facility is also a new investment of the company.

The results of the investment are not only increasing the technological capabilities to optomechanical processing, but also creating new jobs and improving the skills of existing employees.

The implementation of this project is part of the global business strategy of OPTIX - to be one of the leading manufacturers of optical production in Europe and worldwide. The company recently won another project under the scheme for introducing innovations in the OP "Competitiveness", through which will make new investment for 3 million euro.